From 1 to 10, we ranked how different players are adapting to Apple’s ATT

In this recap of the App Growth Summit (AGS) session on the impact of ATT, mobile marketing experts discuss what's working and what's bogus in iOS 14.5. 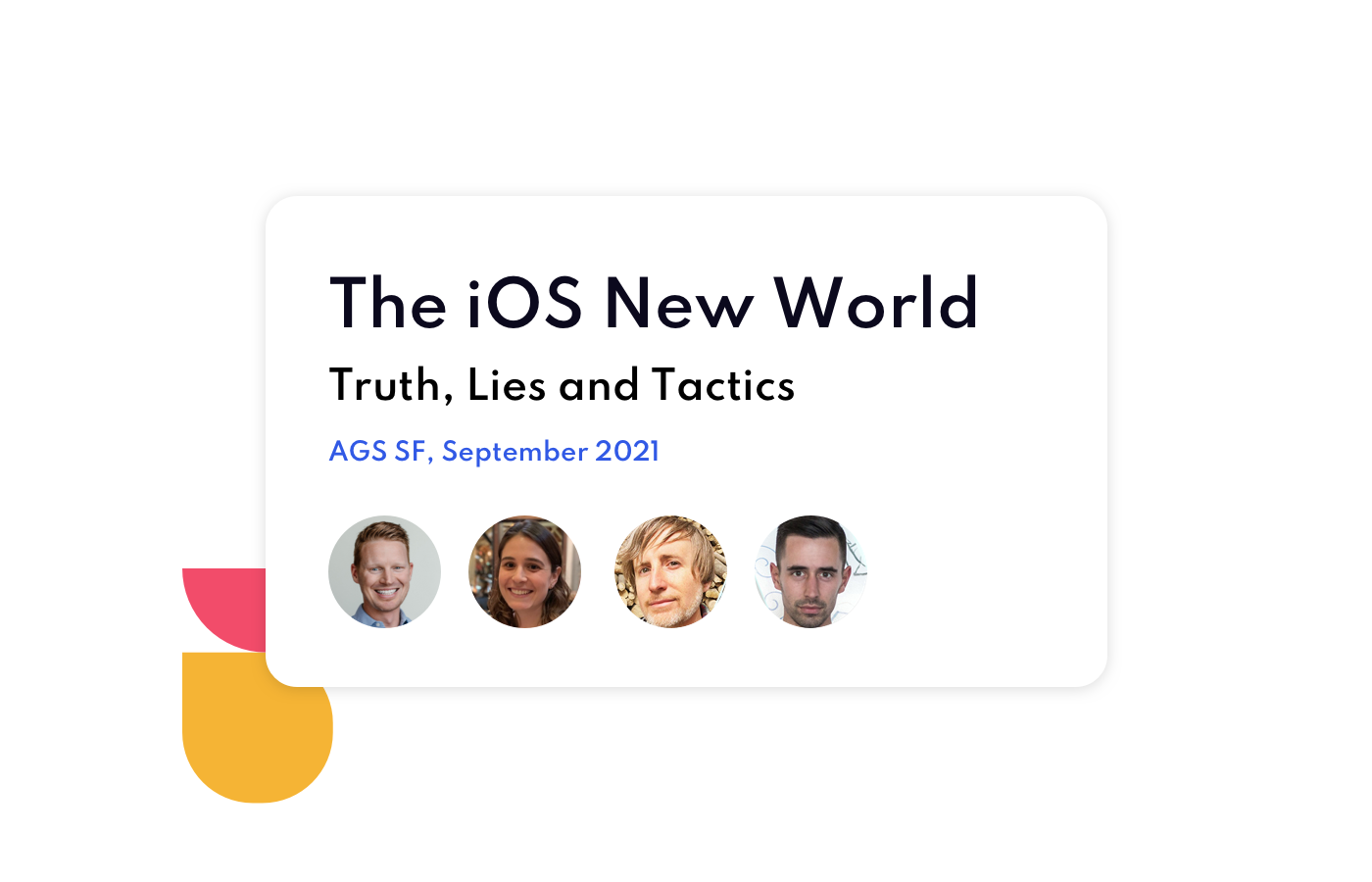 Apple’s recent changes have affected every major stakeholder in our industry: developers, marketers, monetization teams, MMPs, and ad networks amongst others. App Growth Summit (AGS) San Francisco gathered a diverse panel to get their perspectives on how each of these players has been impacted.

An ASO expert, a developer’s Ad Ops director, a DSP’s Head of Sales, and an independent growth consultant walked into a panel and... ranked the ecosystem’s adoption of Apple’s ATT. In this post, we recap the key rankings and takeaways.

On a scale of 1 to 10, with one being the worst and 10 the best, how well do you think our mobile industry overall has adapted to SKAdnetwork?

This was not rehearsed! And yet from different corners of the ecosystem, we graded the industry a solid 7. Why? While some players may be lagging behind, the industry overall seems to be heading in the right direction, let’s dig in.

Replies here varied across the board, averaging out around 6. On the one hand, there’s lower competition than before, which is an opportunity for those who can move quickly. On the other hand, this means that opportunities are tied to what studio/ app you are at, the available resources, and the risks you can take in order to scale.

Another point that drew different rankings, if slightly skewed towards a more optimistic overall grade. Although at the beginning it looked like this was a “game over” for MMPs, the reality is that they are still adding a lot of value for advertisers. In the post-IDFA world, they’ve become an aggregated source of truth for the multiple channels, platforms, and attribution methods that exist. Here Singular and AppsFlyer got special shoutouts for their proactivity.

At Jampp, we feel our partners have been tremendous to work with. From working with our product team on how to map events and our partnerships team to help us identify test partners prior to the official iOS 14 rollout, we have been very happy with MMPs’ efforts. At the same time, it is also accurate to say that they’ve taken their own approach to SKAD. For companies working with multiple MMPs, it can be challenging to unify the process across the board.

When it comes to self-attributing networks, the overall sentiment was not overly optimistic. With a ranking average of 5.6, the panel agreed Facebook was slightly quicker to adapt to the changes. While Facebook’s approach has hardly been seamless, earlier this year they reported record ad revenue despite iOS’ privacy features which suggests marketers are still actively allocating budget to this channel. Google’s approach has been pretty slow and opaque. As Lancaric pointed out, Google only just announced SKAD connections to the MMPs, which evidences they’re rather late to the party.

On the programmatic side, the scenario looks slightly better with an average of 8. Though again our panelists were quick to note that there are various levels of adoption of SKAD and of the different SKAD versions. Many networks seemed to be caught off guard by these changes.

Jampp decided from the onset that we needed to get ahead of the ATT changes by working closely with the networks and exchanges that supported SKAD first. Today, around 80% of our traffic supports SKAD, but within this segment, only 40% supports SKAD 2.2 or higher, meaning many can’t track VTA, for example. This shows there's work to do from sources and publishers to catch up with Apple.

Panelists were on the fence about this one. Middle of the pack ranking for the effects of ATT on app growth as the LAT portion of traffic grows and CPMs change.

As Bradford said, when Apple first announced the ATT rollout, the adoption rates were quite low, but 14.5 brought an increase in the adoption rate. Panelists agreed that as the adoption rate grew, the revenue on the LAT side followed. That said there’s still a lot of work to be done, so this is definitely a topic to follow up on.

Another point the panelists agreed on was these changes are here to stay. If it were possible to rank with negative numbers, the likelihood of Apple doing a 180 on these changes would have averaged -15. It is in Apple’s best interest to continue to push their privacy policy, and at Jampp, we believe that all privacy-focused initiatives ultimately lead to a safer and more transparent digital ecosystem.

Hopefully, we will continue to see the development of SKAD as the adoption rates continue to increase. As Woodward rightfully pointed out at the beginning of the panel, in the midst of the chaos and unknowns, a lot of marketers have stopped spending so those who can figure out clever strategies can get outsized returns. While everyone is figuring things out, if you can implement a good-enough, but less-than-perfect strategy, there are definitely good opportunities. This sentiment was echoed by the other panelists throughout the conversation and especially in their recommendations:

We are big fans of AGS events, and this was one of many interesting panels. In a moment where there is so much uncertainty and potential for innovation, it’s super interesting to connect with others in our industry. We loved hearing the other panelists’ perspectives and sharing our own view of the state of the new iOS world. Let’s keep the conversation going! If you want to read more about ATT Opt-In rates, ATT prompts, and conversion value mapping best practices head over to our iOS 14 hub or contact our team!